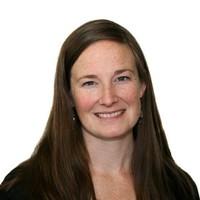 Genevieve is a Executive Director at Ag Innovations, where she works with diverse groups to address the pressing issues of our time, including facilitating the California Roundtable on Agriculture and the Environment (CRAE), the California Water Action Collaborative (CWAC), and the San Mateo Food System Alliance.

In April of 2018, Genevieve was promoted to her current position, where she leads the organization’s program team in developing, designing, and implementing effective collaborative change efforts.

Prior to join Ag Innovations in 2015, Genevieve was Vice President at Global Genesis, an organizational development consulting firm based in Sonoma County, CA, where along with facilitating inventive group processes, she worked with organizations around teambuilding, strategic planning, mission and vision development, and developing leadership. She has also trained leaders in conflict resolution, negotiations, as well as facilitating 360 processes (internal feedback structure implementation), mediation of workplace disputes, and coaching. She has had the pleasure of working with businesses, not-for-profits, academic institutions, and government agencies spanning a variety of sectors, including food, hospitality, construction, natural resources, social services, and others. She has worked and traveled in almost 20 countries, most recently to teach an MBA course in Bangkok, Thailand. As a volunteer and social entrepreneur, she co-founded the annual Sustainable Enterprise Conference in 2005, the San Francisco Urban Alliance for Sustainability in 2003, and CircadiaOne in 2009, a change management firm dedicated to guiding enterprises towards sustainability.

Genevieve received her bachelor’s degree in Political Science with an emphasis on International Relations, and a minor in Geography at the University of California, Berkeley. She is proud to be an alumna of Leadership Santa Rosa (Class XXI), and a fellow of the Leadership Institute of Ecology & The Economy (Class 2008). She is certified to facilitate 360 benchmarks through the Center for Creative Leadership, and Globesmart Profiles (a cross-cultural profile system) through Aperian Global. She loves working with different cultures, and learned to speak Spanish while studying abroad in Chile.

Growing up in both Fresno and Sonoma County in California, Genevieve has developed a great appreciation for food and how it’s grown: some of her favorite moments have been at farmers markets in California and other parts of the world. Her agricultural roots are intergenerational as her mother picked grapes in the Central Valley when she was a teenager, and her father grew up on a ranch. These days in addition to her food-related work at Ag Innovations, Genevieve spends her days running after her young son, cooking, canning, preserving and pickling, and even occasionally camping.

This site uses cookies. By continuing to browse the site you are agreeing to our use of cookies.